The launch of the six strikes anti-piracy scheme in the United States has boosted demand for VPN services and BitTorrent proxies. Data from Google reveals a big surge in searches for terms such as “BitTorrent VPN” and “BitTorrent proxy” over the past two weeks. Some VPN providers see the scheme as a clear invasion of privacy and are encouraging people to protect themselves.

Last year a study in Sweden showed that many people respond to tough copyright enforcement measures by signing up for VPNs and other privacy services.

Instead of stopping their defiant habit, these file-sharers take measures to hide their IP-addresses and bypass the monitoring. The researchers predicted that this would also happen with the launch of the six-strikes system in the United States.

“Some people may stop or share less when they receive warnings, but there will also be a group that will respond to the warnings by becoming more anonymous. A third group will try to find other means to share files than BitTorrent, since these are not monitored,” researcher Stefan Larsson told TorrentFreak at the time.

Looking at Google’s search trends we see that this prediction has become reality. The volume of searches for “BitTorrent VPN” and “BitTorrent proxy” spiked when the copyright alert system launched.

BitTorrent VPN / Proxy searches over the past 90 days 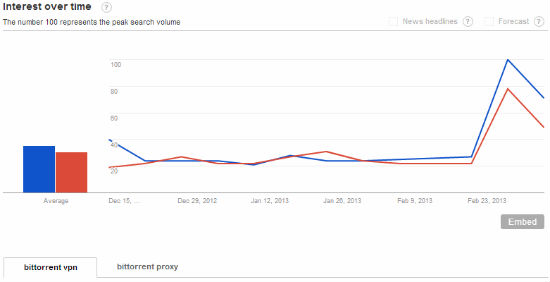 TorrentFreak talked to several VPN providers who confirm that interest in their services has increased. Some even reference the strikes scheme in their “marketing”, such as BeeVPN who highlighted in a blog post that people may want to protect themselves from being wrongfully accused.

“To prevent yourself from being caught in this endless loop of strikes and invasion of privacy use BeeVPN whenever you’re online and defend yourself against others seeing your real IP,” the company writes.

PrivateInternetAccess is not supportive of the six-strikes initiative either.

“The Copyright Alert System has similarities to some of the most draconian systems of control that were implemented by heavy-handed rulers during some of the darkest ages in the history of mankind. Big Brother would be proud,” PIA’s Andrew Lee told TorrentFreak.

Among other things Lee points out that the possibility of people being wrongfully accused is high, and that the system lacks any rights to due process. “As a result of CAS, we have seen an increased amount of discussion regarding VPNs around the social realm,” he says.

Criticism aside, the increased demand in anonymizer services does not mean that the six-strikes scheme has failed.

The Center for Copyright Information (CCI) and their partners don’t see these workarounds as a major problem. Right from the start they’ve made it clear that the program aims to educate the public, in particular the more casual file-sharer.

How many file-sharers stop pirating, and how many choose to hide instead is anyone’s guess at this point. However, recent trends suggest that encryption is becoming more mainstream, whether it’s for privacy protection, anti-piracy circumvention or freedom of speech.

That is, until anonymous VPNs are outlawed, as they appear to have been in Iran last week.

So far ISPs participating in the new Copyright Alert System, which includes Comcast, Time Warner, Verizon and others, have no plans to disconnect stubborn downloaders. But the system is an indication that customers are being monitored whether it’s the ISP itself of a third-party organization hired by content owners. This "big brother" aspect has privacy advocates and consumers alike up in arms.