Say Hola! to the newest route around web censorship 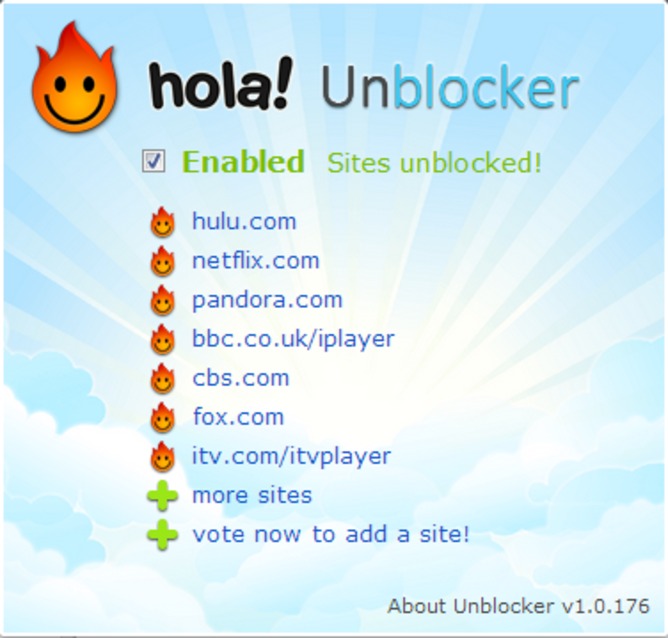 The ongoing copyright arms race between content owners and internet users has taken a new turn. Israeli firm Hola! has recently launched a suite of products that are variously designed to bypass geoblocking and accelerate internet-access speeds.

Hola! is comprised of several products: Hola! bypasses restrictions on sites which are usually geoblocked.

Catchup TV and online movie services such as BBC iPlayer, Hulu, Netflix and many others use geoblocking and so are not available from within Australia.

But circumvention of these geoblocks is commonplace with the use of a Virtual Private Network (VPN) or proxy server. During the London Olympics the media was awash with stories of people using these methods to access the BBC's online coverage of the Games.

VPNs were designed as a way of securely connecting a remote computer to a corporate network, and using a VPN is a rather clumsy method to access multimedia content. All traffic is routed through the VPN which may limit access to other services, and the VPN needs to be connected and disconnected to various servers to access content in different countries.

Not only is Hola! free, but it's different to other services because it utilises peer-to-peer technology, where traffic is not re-routed through central servers but via other computers which have the Hola! Windows client installed.

This peer-to-peer nature will make it difficult for Hola! to be blocked in the same way Hulu has blocked some VPN and proxy services.

The Hola! browser extension is also by far the simplest and most elegant method to bypass geoblocks. The inflexibility and complications which come with setting up a VPN or altering rarely-changed DNS settings can limit the function of a computer for everyday use.

Once Hola! is installed, its function can be toggled from an icon in the browser.

Most people are familiar with technological protection measures (TPM) in the form of region coding on DVDs. Those TPMs try to prevent the disc being copied and try to prevent playback in a place other than the market in which the disc was sold.

Region coding allows Hollywood to segment global markets, releasing movies to one market at a time, maximising the effect of promotional campaigns.

The grey area centres on whether video streaming can be considered a "non-infringing copy". When users sign up to a service let's take Netflix as our example they agree to Terms and Conditions that include a clause on geographic limitations:

Geographic Limitation: You may instantly watch a movie or TV show through the Netflix service only in geographic locations where we offer our service and have licensed such movie or TV show.

The interpretation of this clause of the Terms and Conditions, and the weight given to respecting these must be weighed against the intent of the exemptions in the Copyright Act.

This is critical in deciding whether or not accessing movie content from Australia will be defined as a "non-infringing copy.

Social media services are censored or completely blocked in many countries, and most large workplaces limit access to various websites for security and productivity reasons.

The tools used to bypass these blocks to date include the US Navy-developed high security router software TOR, VPNs and other security software.

While these might be appropriate for some uses, they are complicated to use and are overkill for an individual who just wants the freedom to talk to their friends on Facebook.

The Hola! client software makes bypassing these blocks trivial. When a user wants to visit a blocked site, the Hola! client takes that request, encrypts it and sends it to another computer with Hola! installed.

That second computer works as a proxy by then decrypting the request and then accessing the relevant service. The resulting content is again encrypted by the second computer and forwarded to the original user.

For speed and efficiency, the Hola! client will use several proxies with each handling a small part of the traffic.

The lack of a central server in a peer-to-peer model such as this means that Hola! is difficult to block a successful blocklist would need to be constantly updated and could run to thousands of internet addresses as it would need to block every user of the Hola! client.

Bypassing government censorship is widely accepted as a good thing at least in western democracies.

Hola! is yet another example supporting American innovator John Gilmore's famous quote: "the Net interprets censorship as damage and routes around it".