Censorship of the Internet is on the rise! 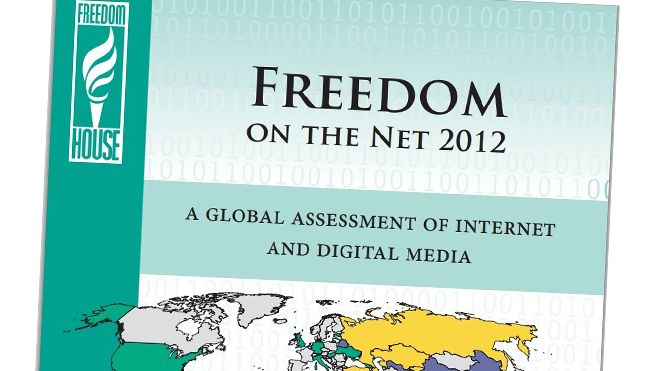 The global reach of the Internet was supposed to democratize information and improve the lives of millions. But as the sophistication of the World Wide Web has spread, so too have the tools of despotic regimes and other political groups to suppress freedom.

From blocking websites and social networks to monitoring text messages and arresting bloggers and journalists who post online, censorship of the Internet is on the rise, according to several monitoring agencies. And the ways and means of blocking political discussion, religious freedom, and reports of institutional corruption are getting more invidious, from China to the Middle East.

"Overall, it's getting worse," Jillian York, director for international freedom of expression at the Electronic Frontier Foundation, told FoxNews.com.

In fact, according to Freedom on the Net 2012 -- a survey by independent watchdog group Freedom House -- of the 47 countries covered "20 have experienced a negative trajectory since January 2011, with Bahrain, Pakistan, and Ethiopia registering the greatest declines" in Internet freedom.

'As social media is changing, that's when you see [censorship] being outsourced.'

Far from leading to the spread of democracy and freedom online, the events of the 2011 Arab Spring led many authoritarian countries to clamp down more tightly, fearful of rebellious citizens inciting and organizing online. In other cases, such as that of Pakistan, religious restrictions were the reason for censoring so-called blasphemous speech online. Still in other countries, such as Mexico, threats and the killing of online reporters and bloggers by drug cartels has stifled reports of criminal activity.

Indeed, the real world effects of such censorship are alarming and getting worse. Last year, 144 journalists, media, and bloggers were killed for their activities, according to Reporters Without Borders. It was the deadliest year since the organization began tracking such murders in 1995, and nearly double the number of such killings -- 73 -- committed in the previous year. The most egregious offenders were Syria and Somalia, followed by Pakistan.

The goal of such violence is often to staunch the flow of information.

In Iran last November, blogger and cyber-journalist Sattar Beheshti was reportedly tortured to death by prison authorities for allegedly threatening Iran's national security on social networks. (Iran's state prosecutor later confirmed that Beheshti died in police custody and had wounds on his body.)

In Bahrain, which hosts the U.S. Fifth Fleet, several online journalists have been tortured and killed for their reporting of the 2011 protests in the country. Zakariya Rashid Hassan al-Ashiri, who reported for a Bahraini Web site, was arrested and died in custody, as did Abdul Kareem Fakhrawi, a co-founder of Al-Wasat, who was also reportedly tortured to death according to the watchdog group Committee to Protect Journalists.

While much of the focus on Internet censorship has centered on large countries like China, there are smaller countries that are guilty of egregious online censorship and suppression, but usually escape notice in the mainstream media. Eritrea, a tiny country across the Red Sea from Saudi Arabia and Yemen, for example, ranks as the worst offender according to the Reporters Without Borders' 2013 Press Freedom Index

"We all have different access to the Internet," York said. In countries with high-speed broadband access, 4G wireless networks, and even cars connected to the Web, it's difficult to imagine how people can be cut off from the Web. But there are a wide array of ways to censor and restrict what people see online.

Many countries tightly control the network routers or nodes linking to the outside world, which allows them to throw a "kill switch" whenever there's a perceived threat like reports about local political corruption from foreign sources. Egypt, Libya and Burma have used this method in the past. Information coming into a country can also be automatically filtered at such nodes.

To control the flow of information within a country, governments also often require local ISPs to filter and report any transgressions, ranging from the mention of banned political or religious parties to Twitter code words used by protesters.

"As social media is changing, that's when you see [censorship] being outsourced," explained Sarah Cook, a senior research analyst at Freedom House, which was founded in 1941.

In essence, this turns every Web site and communications provider into a government censor; when companies balk, their licenses are revoked and owners are arrested. To further limit the spread of information, such as photos of state-sponsored violence, ISPs can also be forced to slow Internet traffic, making it difficult to upload photos or videos.

When this isn't deemed sufficient, an authoritarian regime can completely shut down Web access in a particular region or on a particular day. India cut mobile and Internet service in Kashmir this month in an attempt to quell protests there. In Uzbekistan, authorities have shut down mobile Internet and texting services temporarily to prevent what they claim is cheating on college entrance exams.

Some countries, such as China, employ all these methods and more. It not only entirely blocks certain services and sites within its borders, such as Facebook, but also intimidates homegrown Web operators, filters Web traffic, actively deletes online data, and only allows restricted access to the outside world through its Internet nodes. In at least one case in 2009, the ruling Communist Party cut off Internet access to millions of Chinese in the Xinjiang province following violent protests. Web connections were disabled for several months.

"But there are pockets of hope," EFF's York told FoxNews.com. She points out that as people who have never had Internet access before acquire smartphones and Web connections, there's more attention being paid to online censorship.

Of the nearly 50 countries surveyed in the Freedom House 2012 report, for example, 14 countries registered positive gains in online openness. Most of those advances were in countries such Tunisia, Libya, and Burma -- the direct result of a dramatic political upheaval. Meanwhile, in countries such as Georgia, Kenya, and Indonesia, there was a slackening of controls, allowing for a greater diversity of information online and fewer arrests for crossing digital lines.

Far from leading to the spread of democracy and freedom online, the events of the 2011 Arab spring led many authoritarian countries to clamp down more tightly, fearful of rebellious citizens inciting and organizing online.

Reporters Without Borders
A 2012 list of countries that are "Enemies of the Internet" notes that more than ever before, online freedom of expression is now a major foreign and domestic policy issue.

Freedom House
According to Freedom on the Net 2012, a survey by the independent watchdog group, of the 47 countries covered "20 have experienced a negative trajectory since January 2011.

Google
The Web giant has been using its reach to monitor Internet openness. The Transparency Report visualizes disruptions in the free flow of information, whether it's a government blocking information or a cable being cut.